Recent issues of our monthly newsletter are available here (click each to open):

There are four degrees within the Knights of Columbus. Each degree ceremony imparts a lesson on the Order’s core virtues: 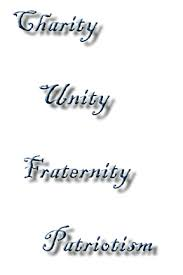 The Fourth Degree is the highest degree of the Knights of Columbus. It is offered only to those Knights who have shown themselves to be especially solicitous of the welfare of their Church, their families, their community and their nation. The Fourth Degree comprises roughly 10% of the membership of the Order. It has five major objectives:

NOTE: Several Knights mentioned in this article about our Centennial celebration have passed away since August 2009.

Christopher Columbus Council 1414 celebrated its 100th year in grand style August 29, 2009, with a banquet that featured Knights of Columbus dignitaries, a dozen past-Grand Knights, Deacons, Deacon candidates and a Brockman Hall packed with Knights and their spouses.

A panel of Council 1414 members served as guest speakers including Deacon Bill Jones, plus three Knights who have since been ordained as Deacons: Brad Anderson, Tom Hill and Steve House. They participated in a panel discussion about their calling, the process and expectations. All were Council 1414 members at the time of the Centennial.

Dignitaries in attendance included Rev. Monsignor Joseph F. Schaedel, long-time vicar general and moderator of the curia who has served as pastor, led archdiocesan Pro-Life activities, and directed the Mission Office and Society for the Propagation of the Faith; Charles Maurer, a Director on the Supreme Board of Directors; Stephan Ziemba, State Deputy; Don Wood, District Deputy; and Scott Hibbs, Council 1414 Grand Knight.

Numerous awards and recognitions were given, including to the longest-serving members. Those honored included William L. Becker, longest continuous membership (62 years); 50-plus years of membership: Joseph G. Wetzel, Herman J. Echsner, Carl T Williams, Carl W. Eddy, Per R. Kalstrup and John J. Keach. Dr. William G. Bickers was honored as the “Senior Grand Knight” for his term in 1955-56; and “Senior Council Members” were James G. Newmister, age 92 at the time of the Centennial, and John R. Blandford, 91.

The Master of Ceremonies was Greg Scherschel, Deputy Grand Knight, and support for the banquet was provided by The Eagle Group and Pentzer Printing who provided mementoes of the occasion in the form of centerpieces, engraved wine glasses and embossed napkins. Also, many of the Knights and their families provided memorabilia and photos of past awards, special events, and activities that were displayed throughout Brockman Hall.